Forty-two addresses on the Barham Park Estate have recently been served with unnecessary “Notice to Quit” orders. All the properties are one- and three-bedroom short-let flats subcontracted from Brent Housing Partnership by the registered social landlord Brent Community Housing as part of the Phase 3 regeneration plan for the Estate. The landlord is expecting the properties to become vacant on either the 11th August or 18th August 2014. (This latter date has been given to a Brent Community Housing subcontractor, the 476 Housing Co-operative.).

The affected tenants regard these NTQs as being unnecessarily premature. Viewing the Council’s regeneration plans, and from discussion with the contractors and others involved in the proposed scheme that it seems Phase 3 is unlikely to start for at least six months. The Council’s website states that the current building under construction, Phase 2C, is not due to become occupied until “Early in 2015”  To date it has been usual to start to move tenants into the new builds prior to initiating the next demolition schedule.

These pictures are of Phase 2C of the Barham Park Estate regeneration plan and were taken at 3pm today.

In addition to forcing a large number of young single people to seek alternative accommodation, which will impact on the council’s Housing Options Team, this early decanting process would also seem to potentially lose the Council substantial rental income, plus service charges and council tax payments.

The residents are also concerned about their neighbours who have council tenancies and await rehousing; as the affected tenants have started to gather signatories for their petition asking for the Local Authority to intervene, the few remaining council tenants have already expressed their worries that leaving properties empty will encourage anti-social behaviour from outside elements. These concerns have been increased since the Tenants’ and Residents’ Association has been informed that the Estate Regeneration Office, the first point of contact with the Local Authority is scheduled for closure in September 2014.

In total the number of occupied flats, including the three assigned to the Estates Office and a currently empty single property, will be reduced from sixty-seven to twenty-one. 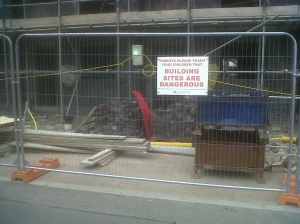 Ready for tenants to move into? Maybe in six months… maybe longer.

Residents from all parts of the Estate, both in the Housing Association-run new-builds and tenants of all the involved landlords mentioned so far, are now linking up to petition the Council to intervene and extend the tenancies of the Brent Community Housing residents until January 2015.

You can currently access the electronic version of the petition here. Please note that due to Brent’s internal rules on petitions you must provide a postcode for either a workplace or a home within the borough. If you are not eligible to sign the petition please feel free to leave a comment below!

This electronic petition is due to close tomorrow in advance of a proposed meeting between Senior Council Officers and Brent Community Housing employees. Please sign up and show your support.

Thanks to all of you who have already signed one of the petitions or have sent messages of support. Our paper petition is much larger.

← South Kilburn Estate residents have “had enough” of Brent’s regeneration plans
“We will not be moved!” Barham Park demo, Monday 11th August 2014, 5pm. →